The latest version of the Modern Language Association Handbook (2016) recommends relying on flexible frameworks for citations, a recommendation that prompts authors to think about the elements of sources and ask questions like "who, what, where, when, and how" (11-12) when making decisions about using sources. Working with sources provides students wtih an opportunity to not only cite the materials in their projects but also develop new knowledge. Pushing on this possibility opens up pathways to make thinking about the ways that we use materials a generative aspect of composing and even a form of composition itself. These compositions operate on the assumption that citations are a kind of metadata. If so, then why limit ourselves to metadata that merely records information like date and place of publication? Instead, why not add data around sources that speaks to the decisions, the sense of meaning, and the personal connections authors associate with with source materials? Some of these possibilities are spelled out in the video, (Re)figuring Citation. And the materials collected here showcase authors using citation as an opportunity generate knowledge and produce new compositions. 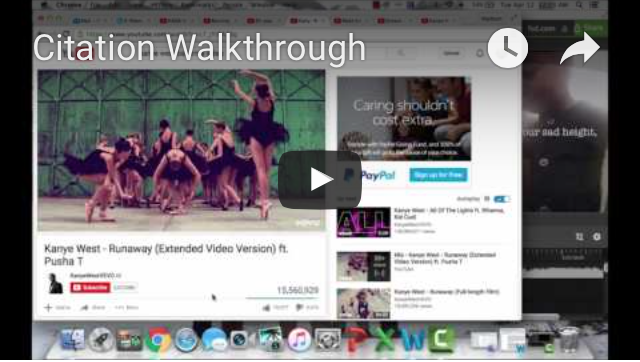 Student Madison Forsey reflects on the materials used in her e-poem and draws a number of conclusions about the use of sources. In class, we discussed YouTube Copyright School, a video that discourages YouTube content creators from practicing fair use adaptations of sources. Forsey responds, "No, we aren't stealing because we couldn't think of anything better. We saw this video or heard this piece of music and saw something beautiful in it. . . ." Forsey also discusses in her portfolio the process of composing the draft of the e-poem, noting that "with all of the clips it became overwhelming at one point. I frequently had to take breaks from marathon editing sessions. Being a perfectionist, it was hard to keep my patience." 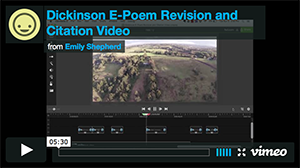 Student Emily Shepherd highlights the personal connections associated with the materials she used in her project. These connections are particularly strong when it comes to the use of music. "Discovering the Avett Brothers was a critical part of my self-identity," Shepherd notes. Her musical selection for the e-poem is linked to an earlier experience witnessing a flock of birds while listening to the song; the personal connections to the project are striking. Shepherd also discusses the obligations remixers have to the creators of sources, noting "a sense of guilt in borrowing the cinematographer's work," but suggesting that the borrowing does not devalue the original and (instead) creates a kind of intertextual connection. Shepherd also notes some of the technical difficulties she experienced related to the resolution of the materials. Again, highlighting the personal connections facilitated by these projects, Shepherd notes the use of a photograph taken by her mother and a video featuring her home country of Australia. 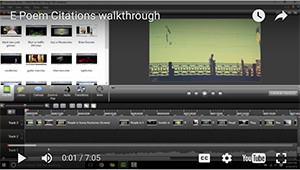 Student Emily Danes highlights a mode of composing and revising based on cutting or selectively reducing the amount of materials: "the more I worked, the more I cut," she notes. She also notes that the project prompted her to spend a good deal of time just exploring materials. Danes explains the message she hoped to develop in the e-poem: the tension between individuals who are insignificant but also importantly connected to others. Danes discusses juxtaposing crowded and busy images with slower, introspective materials to address this tension. She also discusses composing in ways that pair visual imagery with the linguistic elements of her e-poem. As she concludes, she highlights the ways that finding her final image speaks to a continuum of literal or figurative associations for multimedia. Danes suggests that moving away from literal associations made her e-poem stronger. 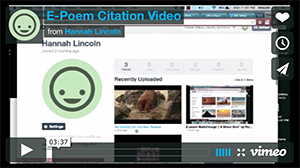 Student Hannah Lincoln notes the passion that she developed for her projects and links this personal engagement with decisions about the use of materials. Lincoln learned "what it feels like to produce something completely original on a public Web site that you cannot keep from being used." Lincoln notes the tension between the desire to publicly share creative work and the potential for others to repurpose that work once it is shared. Lincoln goes into detail about the materials included in her e-poem as a way of acknowledging the sources that she has repurposed. She also discusses the ways the materials resonate with the themes of her e-poem. 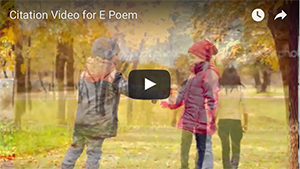 Student Laura Deem begins by discussing the prewriting strategies she used before beginning the e-poem, using color to annotate the poem and creating marginal notes. She notes that seeking materials for the project began with "songs or movies she thought of while reading the poem." This ability to link the poem to songs and films quickly created personal connections and helped Deem identify materials to use in the project. Deem also links the materials to the feelings she hoped to evoke in the e-poem. She goes on to discuss the ways that feedback resulted in revisions to the project associated with the use of materials, particularly moving away from sources that include watermarks. Although she had to adjust her use of materials, she was still able to find items that met her needs. Deem also discusses the difficulties she had in tracking down the origins of materials on the web. She concludes by noting the ways that the materials shed light on her personal interests.

Student Thompson Long discusses the four videos he used to create his e-poem. He highlights his familiarity with the areas depicted in the materials. In his initial walkthrough video, Long brings this personal connection to the fore as he discusses imagery in the e-poem. In the citation video here, he takes up fair use concerns associated with the project. He discusses the editing of the materials in the composing process, noting that he "never actually take[s] long periods of footage" from the materials; instead, he picks "really short segments [that are] often combined with other segments." This approach, Long notes, gives the materials an "entirely different meaning." The discussion suggests that this approach to editing—in addition to creating personal connections—translates into transformative modes of composing with repurposed materials. 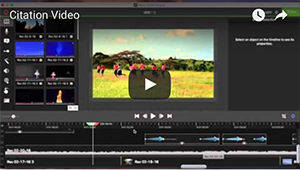 Student Kaitlyn Green provides an overview of the materials incorporated into her e-poem. She also notes a number of personal connections, from her friend's recommendation about subjects for the project to her identification with nature and with dance: "This is a pretty personal video for me." Green notes some of the associations between the materials and the language in the poem and links her use of materials to her daily routines of discovering and liking materials using social media. She notes how reading the poem evoked personal connections with her favorite book and movies, and how she followed those leads to incorporate imagery with those associations into the project. Green discusses as well the use of pacing in the composing of the project, noting how she recorded lengthy videos, and then sped them up for effect. 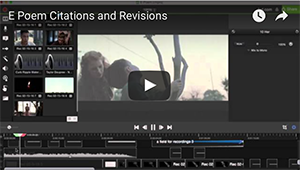 Student Lauren Farrington discusses some of the revisions she made to the e-poem, particularly the use of pacing and timing to create arrangements of sonic and visual materials. Farrington goes into detail about her choice of materials taken from a trailer for Terrence Malick's film,Tree of Life. She notes the progression that she went through with Malick's work and how her initial dislike of the film was replaced with appreciation as she spent more time with the materials, also citing the personal connection she has with her brother's interest in Malick's films. Farrington provides an in-depth discussion of how her engagement with Malick's works led to the choice of materials in the e-poem. Farrington also discusses her use of music, again going into detail about the creators of the pieces she used in the project. She explains many of the decisions behind the use of materials in specific spots in the e-poem. 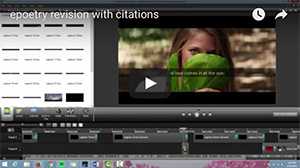 Student Lindsay Byers discusses the decisions behind her selection of materials, noting the tension between the subject of her e-poem—love—and the solemn tone at the end of the piece. She notes that she used multiple clips from one of her sources, but that she edited and placed them in a number of arrangements for variety. Byers also discusses some of the revisions she made by replacing clips for effect. She also notes the ways that the visual materials evoke the sense of the poem that she wants to highlight and some of the editing she undertook to link clips with movements in the poem. Deem notes that after the edits, the project "kind of portrays a different message," a message that emphasizes remorse at the end of the work.